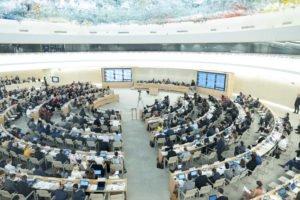 Geneva, 7 October 2022 – A resolution adopted by the United Nations Human Rights Council today welcomes the critical contributions of national human rights institutions (NHRIs) in monitoring, reporting and advising governments and other stakeholders on climate action that is based on human rights.

Led by Australia, the resolution was adopted by consensus and with a broad co-sponsorship from states from all regions, and equally enjoyed strong support from civil society alike.

The resolution highlights the important role of NHRIs in assisting States to adopt effective frameworks to protect the human rights of all individuals, without discrimination, and highlights the particularly vulnerable situations of Indigenous Peoples to the impacts of climate change.

“As affirmed by the resolution, climate change is one of the greatest challenges of the day, directly and indirectly affecting the full enjoyment of human rights. It requires urgent and collective action” said Maryam Abdullah Al Attiyah, GANHRI Chairperson.

“We warmly welcome today’s resolution as it supports and offers further impetus to our work as NHRIs, both individually and collectively through GANHRI, in promoting climate action that is based in human rights and people centred. Thank you, Australia, for your leadership on NHRIs, and all those many supporting us in these efforts” she continued.

At their 2020 GANHRI Annual Conference, NHRIs from all regions adopted a Statement in which they resolved to: work individually and collectively to promote human rights-based climate action.

The Human Rights Council in its resolution also encourages all relevant United Nations mechanisms and processes including ECOSOC and HLPF to further enhance NHRIs’ participation in their work and highlights the important contribution of NHRIs in following-up recommendations of UN mechanism and processes.

Cooperating with UN bodies and mechanisms is a key component of NHRI’s mandate under the Paris Principles and helps ensure that the UN and its mechanisms can receive and act upon the information on national human rights situations that NHRIs can offer.

To support NHRIs in this important work in the context of climate change, GANHR in cooperation with UNEP, developed a Practical Guidance for its members, which sets out how NHRI can engage with human rights and other international mechanisms to report on, and monitor the human rights impacts of climate change.

“NHRIs are one of the most important actors for the promotion and protection of human rights at the national level.  Australia has been, and will continue to be, a strong and consistent advocate for the work of National Human Rights Institutions», said Ambassador Jeff Roach, chargé d’affaires Australian Permanent Mission to the United Nations in Geneva, whilst introducing the resolution before adoption.

The resolution encourages all States to accelerate progress in establishing and strengthening independent and pluralistic NHRIs, in line with the Paris Principles, recognising the important role NHRIs play in assisting States to progress implementation of the Agenda 2030 for Sustainable Development.

To date, 89 of 193 member states have established Paris Principles compliant national human rights institutions. Accelerated progress is required to guarantee that all states meet the NHRI indicator under Sustainable Goal 16 by 2030.

The resolution further states that NHRIs should not face reprisals or intimidation for undertaking work in accordance with their mandate. It encourages strong efforts to investigate and respond to cases of acts of intimidation against NHRIs.

The resolution also welcomes the upcoming 30th anniversary of the UN General Assembly’s endorsement of the Paris Principles in 1993, and acknowledges the important partnership between GANHRI, OHCHR and UNDP as well as the role of UNEP in support of NHRIs everywhere. 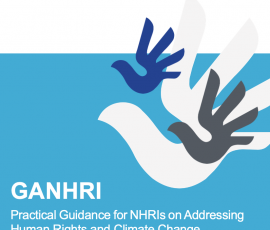