The high-level meeting, which also was attended by senior officials of both organizations and of the GANHRI Head Office, took place amidst the rapidly evolving human rights and humanitarian crisis in Ukraine.

In line with its mandate as Ukraine’s national human rights institution, Ukraine’s Parliamentary Commissioner for Human Rights Denisova and her team are working with authorities, the UN Human Rights Office and UN agencies, displaced community groups and partners to report the human rights situation and coordinate desperately needed humanitarian assistance.

Since the beginning of the crisis, the Commissioner is documenting and reporting on violations including the right to life and security, investigating into reports of missing persons, and monitoring the situation of prisoners of war in detention.

The Parliamentary Commissioner has established a hotline, operating round the clock, whereby it receives and identifies needs from the people in Ukraine. Most reports received by the institution relate to humanitarian aid, the safety of humanitarian corridors, missing persons and economic rights including the right to health, the right to housing, sanitation and the right to food, reported Commissioner Denisova during the meeting.

The UN Human Rights Office, in its most recent update on civilian casualties, reported that most of the civilian casualties recorded were caused by the use of explosive weapons with a wide impact area, including shelling from heavy artillery and multiple-launch rocket systems, and missile and air strikes.

“I am deeply grateful for the unwavering support we have received from peer national human rights institutions in the region in providing and coordinating humanitarian assistance to those many in desperate need” said Parliamentary Commissioner Denisova during the meeting.

Over 3.5 million refugees are estimated by UNHCR to have fled to neighbouring countries since 24 February, and numbers are rising.

GANHRI Chairperson Al Attiyah and Commissioner Denisova also explored the role of the Parliamentary Commissioner in reporting evidence-based information on the human rights situation to international bodies. This includes the independent international commission of inquiry, established by the Human Rights Council by resolution 49/1, adopted on 4 March.

In a statement to the Human Rights Council’s urgent debate on Ukraine, delivered on 4 March preceding the adoption of the resolution, GANHRI had expressed grave concern at the Ukraine emergency. It called for an end of hostilities, for respect for international human rights and international humanitarian law and urged immediate, safe and unhindered humanitarian access to all those in need.

GANHRI also recalled the Kyiv Declaration, adopted in 2015 following an International Conference of National Human Rights Institutions on the roles of NHRIs during conflict and crisis situations.

The Declaration sets out actions NHRIs may undertake by applying their Paris Principles mandate during conflict and post conflict, including monitoring and reporting the human rights situation, as well as cooperation with regional and international actors.

Acknowledging that NHRIs in conflict and post conflict may face particular challenges including security and threats, the Declaration calls for the respect of the NHRI’s independence by all parties.

GANHRI and the Parliamentary Commissioner will continue exchanging closely on the situation in Ukraine, and responses thereto.

GANHRI statement at HRC49 on debate on Ukraine 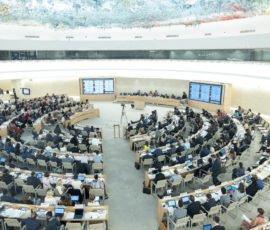 GANHRI delivered a statement during the Urgent Debate on the Human Rights Situation in Ukraine at HRC49.
GANHRI expressed its concern about the situation of civilians in the country and called for an immediate end of hostilities and respect of international humanitarian law and international human rights law.