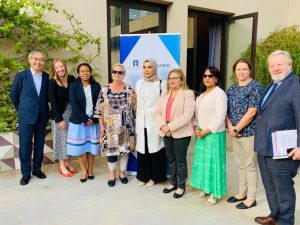 28 October 2022, Marrakech – The Bureau of the Global Alliance of National Human Rights Institutions (GANHRI), met from 27 to 28 October in Marrakech, Morocco, and evaluated progress made under the current Strategic Plan (2020-2022) and discussed priorities and activities moving forward.

The meeting which was chaired by GANHRI Chairperson Maryam Al Attiyah and hosted by GANHRI Secretary Amina Bouayach and welcomed the participation of GANHRI Regional Chairpersons, GANHRI Bureau members from all regions, as well as representatives of the GANHRI Head Office, regional network secretariats – APF, ENNHRI, NANHRI and RINDHCA – and partners from the OHCHR and UNDP.

The Bureau considered among other items:

The International Conference for National Human Rights Institutions takes place every three years and aims at developing and strengthening the cooperation between NHRIs and to discuss relevant items on their agenda.

The last International Conference was held in 2018 in Marrakech, Morocco and gathered more than 260 NHRIs from around the globe to explore the role of NHRIs and their contributions in expanding civic space and promoting human rights defenders, with special focus on women human rights defenders (WHRDs).

The Bureau also discussed the challenging operational context at global, regional and national levels reported by many GANHRI members, and discussed cases of situations of NHRIs under threat and operating in challenging contexts such as conflict.

Working closely with regional networks and partners including at the UN, GANHRI has been providing support to several members, including NHRIs of Afghanistan and Ukraine.

“Supporting NHRIs to be strong and independent, and protecting them, is one of our single most important contribution to promoting and protecting human rights of the people and helping translate the fine provisions of international human rights obligations into lived realities on the ground” – said GANHRI Chairperson Maryam Al Attiyah.

This has also been addressed by GANHRI in a statement at the 51st session of the Human Rights Council during which GANHRI called on states to strengthen their support and provide a safe environment for the effectiveness of NHRIs work.

Providing strong support to NHRIs and others facing threats is also a key element of GANHRI’s Global Action Plan on Human Rights Defenders and Civic Space. Launched recently, the Global Action Plan was developed in close consultation with all GANHRI members and partners from United Nations and civil society.

With 2023 marking the 30th anniversary of Paris Principles, as well as of the creation of the global network of NHRIs, and of the 75th anniversary of the Universal Declaration of Human Rights, GANHRI will develop and implement year-long celebrations to mark these anniversaries.

The meeting also received updates from the Sub Committee on Accreditation (SCA) on the SCA retreat hosted by GANHRI in October in Geneva, and discussed proposed statute amendments.

GANHRI Secretary Bouayach concluded the meeting highlighting how “during the global pandemic, NHRIs have been able to successfully adapt to face the imposed restrictions. With this 2-day gathering of GANHRI Bureau in Marrakech we are making a full comeback to fulfill our missions and roles to protect human rights.”

GANHRI Bureau members thanked Secretary Amina Bouayach and the team of the National Human Rights Commission of Morocco for the warm hospitality throughout the two-days meeting.

The GANHRI Bureau is the committee of management of the organization established under Article 43 of GANHRI’s Statute. It is comprised of 16 members coming from an “A” Status NHRI, 4 from each of the GANHRI regional groups. Bureau Members implement the decisions of the General Assembly.