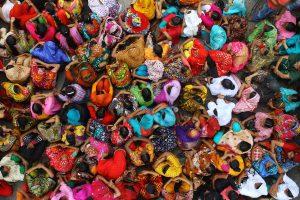 The report documents progress made by the Victims’ Rights Advocate in integrating a UN system-wide victims’ rights approach and details the achievements of the Office and the field advocates.

The report highlights the partnership between GANHRI and members with the Victims’ Rights Advocate and her office, in support of victims of sexual exploitation and abuse by United Nations staff and related personnel.

National human rights institutions can play a key role in supporting victims of sexual exploitation and abuse by UN staff and personnel.

In 2021, GANHRI and the Victims’ Rights Advocate have partnered up to support NHRIs in this role. This collaboration led to creation of a guide for national human rights institutions on prevention and response to sexual exploitation and abuse, training and awareness-raising, support for victims, including in accountability processes, and advocacy for legislative reform.

The guide was launched during an online side event to the General Assembly, co-hosted by GANHRI and OVRA and co-sponsored by the Office of the United Nations High Commissioner for Human Rights (OHCHR) and the Permanent Missions of Australia, Costa Rica and Germany, and which provided avenue for Member States and national human rights institutions to discuss opportunities for collaboration with the United Nations to support victims.

GANHRI and its members look forward to building on the fruitful partnership with the Victims’ Rights Advocate in 2022 and beyond, in support of victims of sexual exploitation and abuse by UN staff and related personnel. 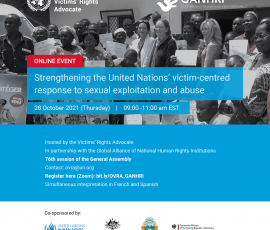