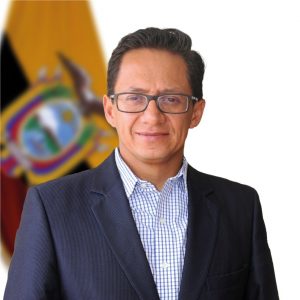 Geneva, 27 October 2020 – Dr Freddy Carrión Intriago, Ombudsman of Ecuador, was elected to the role by GANHRI members through an online voting procedure that concluded yesterday. This election follows the end of Carlos Alfonso Negret Mosquera’s term as Ombudsman of Colombia and as former Chairperson of GANHRI since March 2019.

Dr Freddy Carrión Intriago is a lawyer and Doctor in Law from the Pontifical Catholic University of Ecuador, with a specialization in Constitutional Law and Higher International and European Studies.

Dr Carrión has pledged his unstinting support to ensure that national human rights institutions (NHRIs) can operate effectively and without restrictions during the COVID-19 pandemic.

“As a third wave of the pandemic looms in countries around the globe, NHRIs continue to be at the frontline in responding to the needs of their communities, including those most vulnerable to the virus,” Dr Carrión said.

“They also play a critically important role to advocate for human rights to be at the heart of their State’s response and recovery measures.”

However, Dr Carrión said that sweeping restrictions on freedom of movement, assembly and other fundamental rights in many countries have limited the operations of NHRIs.

Further, some NHRIs have faced threats, attacks and reprisals for undertaking their lawful human rights work.

“These attacks must end,” Dr Carrión said. “Now, more than ever, all people in all countries need strong and independent NHRIs to stand in solidarity with them and uphold their human rights.”

“In my role as GANHRI Chairperson, I will be a vocal advocate to defend NHRIs from attacks, as well as advocate for States to bolster their support for NHRIs,” he said.

“I will also continue to encourage cooperation among NHRIs so we can learn from each other and encourage each other to better serve our communities during COVID-19 and beyond.”

Representing the Americas region, Dr Carrión will serve as GANHRI Chairperson until the 2022 General Assembly.

The Extraordinary General Assembly also ratified the election of new Bureau members appointed by the Asia-Pacific and African regional NHRI networks, respectively in September and November 2019.

In line with GANHRI’s new Strategic Plan (2020-2022) GANHRI’s immediate strategic priorities are strengthening, and protecting NHRIs; supporting NHRIs including by promoting knowledge exchange; and consolidating GANHRI as global alliance of all NHRIs.

The next meeting of GANHRI, the 2020 GANHRI Annual Meeting, including the ordinary General Assembly will be held online from 3-4 December 2020, with discussions that explore: